Why professors do not train you for the non-academic job market – and how to handle it! 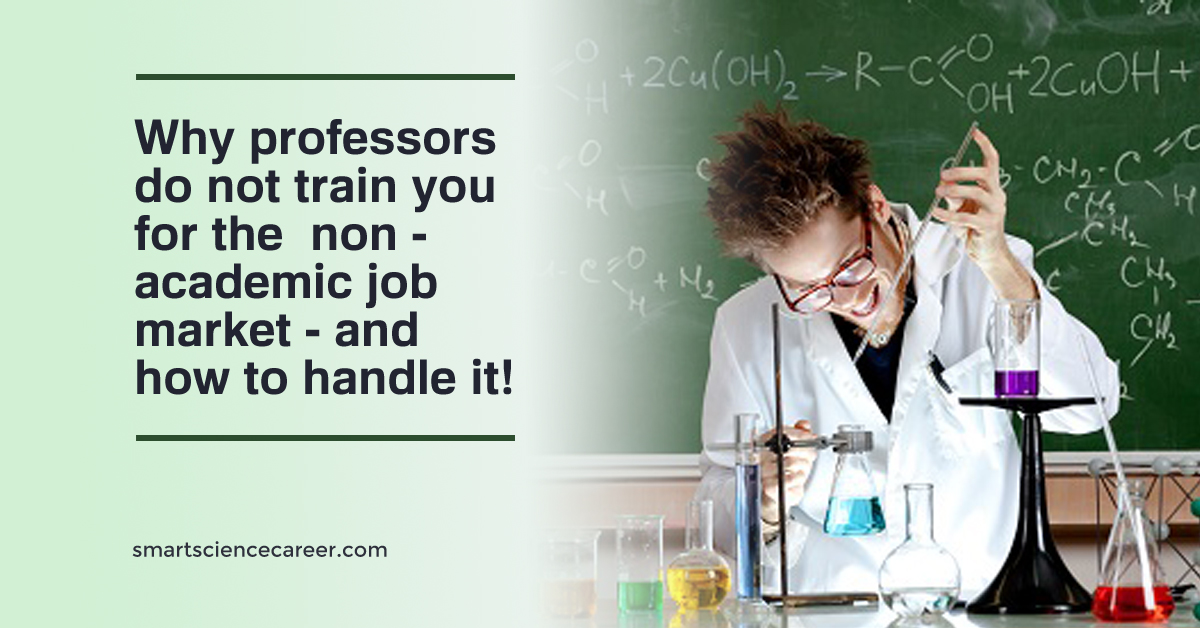 About 97% of all young researchers find a job *outside* academia. However, most professors focus on academic success and scientific excellence. Some professors are afraid to transform young scientists into “slaves of the market”. Others simply do not feel qualified. Most universities invest a lot of money and efforts to train PhD students and postdocs well for the non-academic job market, but most young researchers do not feel well-prepared. Why is it so difficult for universities to fulfil these needs of young scientists?

One of the biggest challenges for universities is to combine contradictory tasks such as preparing PhD students and postdocs for the job market on the one hand and to produce fantastic research for the greater benefit of all on the other. PhD students and postdocs are funded and hired to generate excellent science. Many funding bodies allow only a very limited amount of non-research activities such as teaching or following courses. The aim of every funding institution is fostering scientific excellence.  This is their societal task. The scientific community has to generate new knowledge to produce new diagnostic methods and more efficient therapies, to develop new technologies for business and pleasure and a deeper understanding of human nature. In other words, every minute not invested in scientific output is a waste of tax payer’s money! 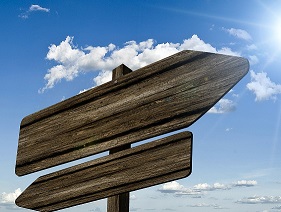 On the other hand, there is an increasing demand from political stakeholders “to prepare students better for the job market” – especially in economically difficult times. Thus, bachelor and master students should finish quickly their studies to get a job and contribute to the economy and pay taxes. From this perspective, PhD students are a luxury, the science machinery needs them as a “necessary evil” but they should finish in time and – again – quickly find a job to contribute to the economy and pay taxes. In other words, every unnecessary minute invested in scientific output is a waste of tax payer’s money!

What to do? Be prepared that you will get contradictory messages from your supervisor and the university. Decide early what kind of job you aim at after your PhD or postdoc time. Read more here: How to find your dream job in science and Should I become a professor?

Universities struggle to handle this dilemma because scientific excellence and employability training are not easy to combine. Focus on scientific excellence produces young researchers who are perfectly prepared to lead an academic research group and pursue an academic career. Focus on employability training costs time and money which is not spend in research.

What to do? Be proactive and find a good mix of both. When the output of your PhD or postdoc work is good to excellent your supervisor will much easier accept the participation in courses and seminars on employability skills. But be careful, professors must take care that their PhD students work enough.

When a professor gives too much time to PhD students and postdocs to prepare for the non-academic job market they are investing less time in their research projects. In other words: the publication output and the career of the professor will suffer. This is particularly relevant for young professors who have yet to survive their tenure-track period. To my knowledge there is no functional system in any university which successfully rewards professors to prepare their staff members for the non-academic job market. But even when professors are willing to prepare the young researchers there are not many role models and blueprints on how to do that. Therefore, this task has been delegated to career centers and doctoral schools.

What to do? Be aware that professors get rewards for scientific excellence. This is their task. Choose a supervisor who feels responsible for the career of their PhD students and postdocs and supports them anyway.

CREATING “SLAVES FOR THE MARKET” IS EVIL

Sometimes there is considerable resistance in the academic world to train young researchers for the industry sector. Some professors do not want to transform their students into ‘slaves of the market’. This attitude is honorable but does not help the young researchers to be well-prepared for their later career if they are not part of the lucky few who become professors with a permanent contract until retirement.

In some institutions there is resistance to focus on theemployability of the young researchers. One colleague told me: “PhD students should stay in the lab 24/7 and publish a Nature paper and not waste their time with this doctoral school rubbish”. In principle, young researchers are paid to produce scientific excellence. “Training in employability skills should be the task of the future employers”. This attitude is in sharp contrast to the demands of the political stakeholders. In addition, there is good evidence that PhD students and postdocs which are educated in transferable skills are much more productive.

Similar is the notion that time and money should be invested primarily in staff that stays at the university. Why train the young researchers in employability skills when >90% leave anyway? There is even the danger that the best people become aware of other options and the university loses the best people to the industry: “We train the best – and keep the rest.”

Professors are not competent to train young researchers for the non-academic job marketWhat to do? Select a supervisor who understands that transferable skills exert immediate beneficial results for the research group. See also the related posts: Do postdocs need leadership skills? and Pleasure or pressure?

One of the biggest problems in this context is that many professors have never – never – worked outside academia. After a successful career as a postdoc with a number of key publications and considerable networking they get a tenure-track position in a university which sees some potential in them. After surviving the tenure-track procedure they “end up” with a life-time position in academia and stay there until retirement. Some professors may have an arrogant attitude and a lack of respect for non-academic work.  In the best case they have collected some experiences in the industry or public sector and came back to academia. Others have at least some industry collaborations and know some of the decision processes from a distance.

What to do? Do not expect your professor to give you reliable information about the non-academic job market.

PROFESSORS ARE NOT QUALIFIED – BUT CAREER CENTRES ARE

Universities want professors to strive for scientific excellence. It is NOT their job to train you for the non-academic job market. Consistently, they are not systematically educated to do that. The task is delegated to career centres and doctoral schools and those quite often do a great job.

What to do? Make sure that your supervisor is happy with your productivity and use as many of the trainings as you can get. Most transferable skills will also make you a more productive scientists and may pave the way to develop leadership skills which are probably useful in every other job later. Read more here: Do postdocs need leadership skills? and 15 essential skills to lead your research group.

One great way to expose young researchers to the non-academic labour market are joint projects with the pharmaceutical industry. Young researchers gain their experiences by working on industry projects in an industry environment. Unfortunately, these collaborations are difficult to get funded, collaborations between academia and industry have to grow over years and have to be based on mutual trust. In the best case, such a collaboration leads to industry funding of academic research. The disadvantages are that industry projects often do not lead to high impact publications, there are always IP issues which may even prevent a publication and industry interests in certain research domains may suddenly change within months. In addition, only a fraction of young researchers wants to work in a pharmaceutical company.

Thus, academia-industry collaborations are a great model to expose young researchers to the job market but it is not a scalable model.

Finally, the attitude of young researchers is also a reason that they are not well enough prepared for the non-academic job market. Interestingly, many young researchers do not think about their postgraduate careers until they are in the last year of their PhD. Data from ECOOM in Belgium indicate that about 30% of young researchers in natural sciences, engineering and life sciences continue their career in academia – mostly as postdocs. A survey performed by us showed that nearly 80% of these postdocs hope to pursue a career in academia although only about 10% really end up in higher education (read more here: Should I become a professor? Success rate 3 %!). 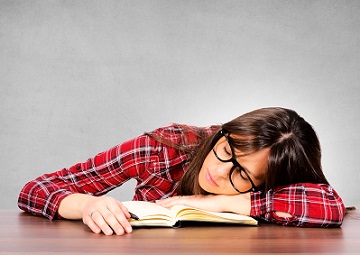 As a result they may only half-heartedly follow trainings and events which can get them into contact with the non-academic job market.

What to do? Make a very clear decision whether you want to stay in academia or actively get informations about the non-academic job market. Do not wait until the last six months of your contract – start early!

The typical PhD or postdoc training leads only to peripheral contacts with the non-academic job market. During the last decade, most universities have added a second layer of training to the systematic education of PhD students (doctoral schools and career centers). Transferable skills are now an accepted part of the PhD training and increasing numbers of postdocs participate in courses on leadership skills. There are now multiple initiatives and courses which bring young researchers in contact with the industry, introduce them to the “entrepreneurial mind-set”, help to make better resumes and CVs, prepare a brilliant job interview, have 1-on-1 discussions with HR consultants and learn about careers in companies and the public sector.

What to do? Use these possibilities – and become an ambassador for such a complex education of young scientists when you continue your career!