Good reasons to have a love-hate relationship with science 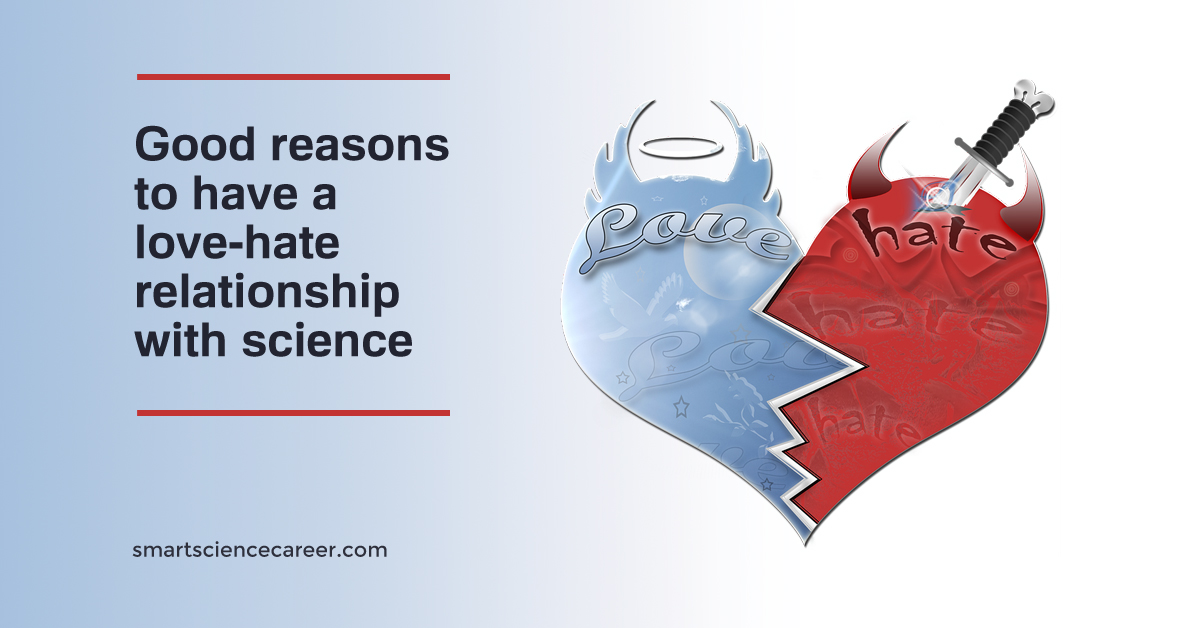 Among the many researchers I know there are many people who have adapted either a pure cynical attitude towards the scientific establishment or fight with an intensive love-hate relationship with science (in academia as well as in industry). I personally see the following painful dilemmas which cannot be solved:

Science helps us to understand the world

One of the strongest motivations to study science which I observe in young researchers is the wish tounderstand how life works and which mechanisms hold the universe together. However, when they enter the lab the will work on a very specific, well-selected, very focussed research question which only provides fragmented information about a tiny aspect of the huge and complex universe. The young researchers soon realize that their contribution will probably not change the world. Even a Nature or Science paper will probably not change the world but – in the best case – open a new research domain. In addition, young researchers learn that they know only after 5 to 10 years whether a publication has survived the rigorous process of replication/falsification by other researchers. My personal conclusion is that we have no other option than to become humble that we (as a single person and as part of humankind) will only understand a tiny fragment of reality.

All scientific endeavour is pointless

Closely related to the previous point is the feeling that most – if not all research activities – do not lead to real progress but just add a little insignificant piece to the information overflow. Thomas Kuhn described the famous concept of a ‘paradigm shift’ in his highly influential book The Structure of Scientific Revolutions

(1962). Unfortunately, the author himself and many of his followers used this term in multiple different manners which diluted its meaning. As a result, a broad population of scientists sees scientific progress only as ‘paradigm shifts’ in the hollow form of “scientific trends” and “science bubbles” (cf. the stem cell bubble). This attitude breeds sarcasm, cynicism and negativism in older scientists. On the other hand there are publications which document scientific progress (see for example Diamandis & Kotler: Abundance: The Future Is Better Than You Think

). These may help to motivate young researchers substantially. However, it remains a matter of philosophical and political debate whether this progress is worth the effort.

Only rarely older scientists develop an attitude of ‘wisdom’ which supports younger researchers in their careers and gives them guidance.

Science does not help us to make moral decisions.

Science does not give us the answer for moral, ethical, value-based questions. Science only shows us predictable consequences in the best case scenario or just a lot of contradictory information. Let me give you two simple examples. Research from the last decades produced pretty convincing evidence that smoking damages our body for example the heart and blood vessels, the lung and the elastic fibers in the skin. Thus, it is rather predictable that the habit of smoking will result in a higher probability of developing cardiovascular problems, lung diseases including carcinoma and will make the smoker look older. Science does not give us the moral imperative to stop smoking. This value-based decision is made under the assumption that the long-term effects of smoking are worse than the long-term effects of non-smoking. However, in many important domains of our daily life there is so much contradictory scientific information that it does not help us to make easily value-based decisions. Typical examples are the multiple, contradictory studies about the best diet or the notorious debate about climate change. However, I prefer to have a lot of contradictory information which can be hopefully filtered by clever meta-analyses than having no information or just doctrines without a scientific base.

Please tell us your reasons to have a love-hate relationship with science and add a comment below.

From disorientation to clarity

Take the course "Find your dream job in science"

Do you want a succesful academic career in science?

Take the course on "How to become a professor"

This website uses cookies to improve your experience while you navigate through the website. Out of these, the cookies that are categorized as necessary are stored on your browser as they are essential for the working of basic functionalities of the website. We also use third-party cookies that help us analyze and understand how you use this website. These cookies will be stored in your browser only with your consent. You also have the option to opt-out of these cookies. But opting out of some of these cookies may affect your browsing experience.
Necessary Always Enabled

Any cookies that may not be particularly necessary for the website to function and is used specifically to collect user personal data via analytics, ads, other embedded contents are termed as non-necessary cookies. It is mandatory to procure user consent prior to running these cookies on your website.