Social media profiles are bad for most scientists! 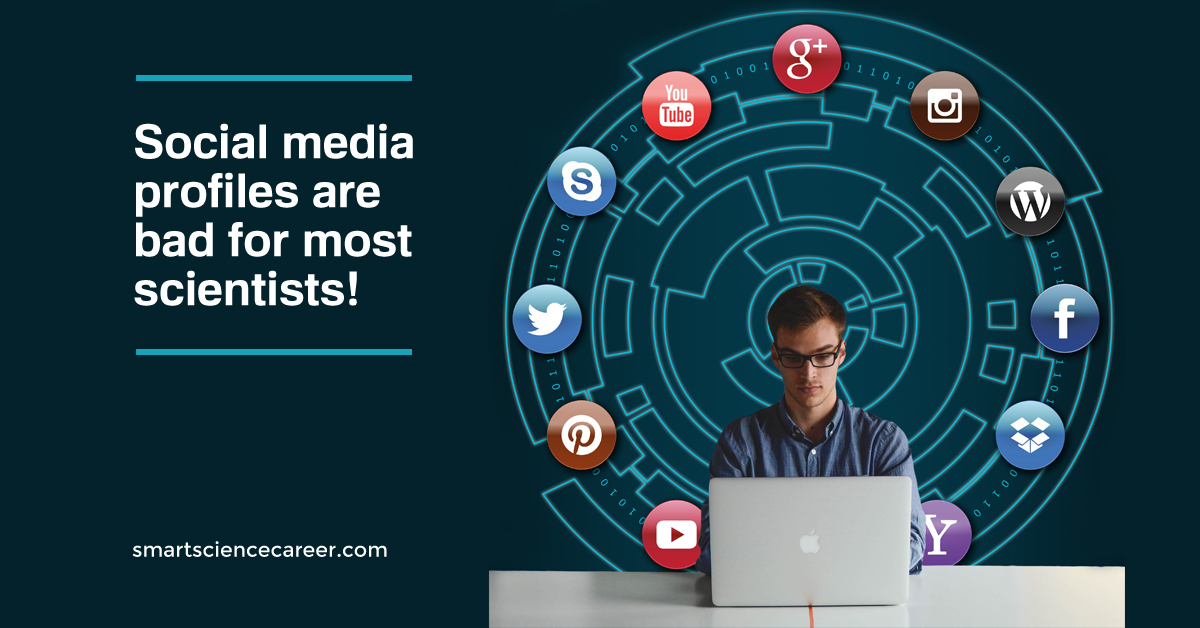 There are good reasons to have at least one professionally looking social media profile for a career in science:

–          PhD students and postdocs will be googled by potential employers. They will check your profile on the website of your current employer and on your social media pages if accessible. The websites of employers are mostly not very informative and limit the possibilities to personalize the profile. The private websites of most people  are mostly inappropriate for finding a job in science.

–          The same is true for young group leaders: potential employees (PhD students, postdocs, technicians), collaboration partners, bachelor and master students and journalists will search for online information about you.

Thus, a professionally looking social media profile may help to create a good first impression and support your personal branding. But caveats are legion:

BEING EVERYWHERE IS BAD

Older scientists (born before 1970) are not grown up with social networks and tend to interpret them as a waste of time – especially as a waste of working time. Interestingly, there is some evidence that employees are more productive when having the freedom to have breaks of leisure surfing on the web. However, senior scientists may have some reservations to hire a young scientists who is present on all platforms. The applicant obviously spends a lot of time in social media and may continue this behaviour in the new position – instead of working wholeheartedly on his/her research project.

Thus, being present everywhere may be interpreted as not working enough!

When screening applicants it became a normal procedure for many group leaders to google the most interesting candidates to get more information about them. When you are currently looking for a job in science you should avoid the following mistakes:

It is a good advice to start with only one of the four major services: LinkedIn, Facebook, Twitter or Google+ and add a ResearchGate account. Read more here:  On which social media platform should I post a professional profile as a scientist?

SOCIAL MEDIA PROFILES CAN BE BENEFICIAL IF USED WISELY

In conclusion, select one or two social media platforms and build a convincing profile. Only embed a link to these profiles in your email affiliation and CV after you have professionally designed them.